About the Newf Rescue logo...

to my very special Newfy! 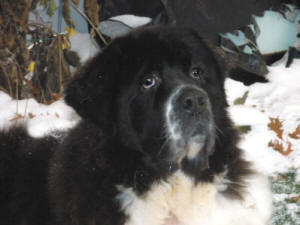 Pebbles loves to swim, or should I say float... I want to make it a wonderful last memory for this girl who brought so much to my life and changed it forever. She was such a maternal figure and nobody could resist her when she looked at them with her big brown eyes. It's been a couple years since she's been able to get into bed with me and we both certainly missed that spooning. I remember every morning she would start barking very softly at 6 a.m. to feed her, then slowly her bark would grow louder and louder until mommy opened her eyes. Once I said good morning, we both stretched out on our backs on the bed, Pebbles whacking her tail (bam-bam) on the bed and her getting some belly rubs and kisses before our feet would hit the floor. All the wonderful memories she has given me bring such a broad smile to my face.

In 1990 I was first introduced to newfies and when Panda passed away at 11 years old, I cried and cried for weeks on end. I didn't go to work, didn't talk to anyone on the phone, I was literally broken-hearted. Friends sent me flowers, fruit baskets, cards galore. I plucked a fresh flower from one of the baskets and stuck the flower in the ground on Panda's grave in our backyard. This was the last week of October, weeks had gone by and the flower kept it's vibrant color and strength to stand straight up despite snow and chilling temperatures. After weeks of searching and calling breeders, back-yard breeders and puppy millers (I didn't know better at the time), I still didn't find a newf to help heal my wound. Then, Kathy Wortenberger (who was very kind in sharing her knowledge through the years) told me about Rescue as she didn't have any pups and knew how distraught I was... that's when my life changed. I went to PONCs Chair Foster's home, Lynn Reinhardt, and took one look at Pebbles and dropped to my knees as she came running into my arms. We brought Pebbles home at 10 months old and I took her to Panda's grave to let Panda know she would always be in my heart, but I needed Pebbles to help me heal. The next morning, the flower had wilted over and I swear to this day, Pebbles was Panda-sent!

Pebbles had come from what was probably an abusive environment as she has two scars across her forehead between her eyes, probably smacked with something hard because of her barking, which we had come to know as her cry for attention. She was placed in another adopted home before us but was returned because the people said she had growled at one of their children (guess they didn't know newfs <vbg>, their loss, my gain!).

I was so grateful to rescue that I developed this web site as my contribution to help Newf Rescue efforts; to try and give back to the program what I was so blessed to have received from them... Pebbles.  I chose Pebbles as the mascot for the Newf Rescue logo and the recognition and exposure which was so badly needed for rescue efforts has helped thousands of rescues on a national basis since then. Throughout the years, Pebbles was a very big part of our fostering and has always been a great judge of character with all the rescues that came through our door. This web site assists all the regional rescue clubs. The site generates a tremendous exposure to the rescue cause and is recognized on a national level. Adoption inquiries are continually received from throughout the United States on a daily basis, benefiting all the NCA recognized regional rescue clubs. Over 90% of the applications received are referred by an Internet search. As a result of these spectacular numbers, Newf Rescue has placed Newfs with close to 80% of the online adoption requests received. Now that's exposure!

Pebbles has always been a very agile, vibrant and boisterous newfy with an immense personality and vigor for life. She absolutely loves parades... the excitement of a crowd of people and noise just thrills Pebbles, she's definitely a "party-gal". We've never met a male newf that hasn't fallen head over heels for her and she has always had the ability to talk with (not to) humans with her soulful eyes.

Her puppyhood scars between her face may have been the reason she developed epilepsy when she was five years old. Her seizures were so severe she blew out her knee and could barely walk for months because of all the torn ligaments she incurred. We could not get her the surgery until we had the seizures under control. For almost a year, Pebbles was having such a difficult time just walking, but being the resilient girl she is, had learned how to play by just laying down and mouthing, and found contentment in being able to at least do that. We bought a newf-sized wagon so that Dino could pull Pebbles in the parade as we didn't want Pebbles to miss out on doing things she loves so much. She was so happy to be "paraded" about in this wagon and took the air of royalty as she held her head high. Through a daily regimen of water exercise that past summer and increased walking distances through late summer and fall and being seizure-free for more than 6 months on her pheno meds, Pebbles was able to walk more than a mile and was able to march in the Christmas Parade with all the vigor of her puppyhood. Although Pebbles hasn't been able to march in parades anymore, she still lives life in abundance the best she can.

Well, the time has come after 11 years and 7 months to help her cross Rainbow Bridge. She is unable to stand up on her own, not able to potty by herself, and it's difficult for her to breath with the tumor pressing against her lungs. She is no longer interested in food and the only solice she has is floating in the pool with help getting in and out. Panda, Dino and Little Boy will be ready for her at the bridge.